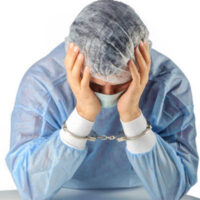 A longtime Virginia OB-GYN has been found guilty of multiple counts of health care fraud by way of ordering unnecessary treatments and surgeries—notably hysterectomies—for women who “didn’t need” them. The FBI, which spearheaded the investigation, claimed that Javaid Perwaiz performed “diagnostic procedures” with broken equipment and scared women into having invasive surgeries, usually by claiming that they had cancer. Perwaiz faces a maximum penalty of 465 years behind bars.

Perwaiz was convicted of tax fraud in the 1990s and had a disciplinary note attached to his medical record for performing 10 hysterectomies without medical necessity. He is also accused of falsifying medical charts, inducing labor on days that were convenient for him, and backdating consent forms.

Most of Perwaiz’s patients expressed shock at his criminal charges and the idea of contraception for younger women remains a controversial issue in American society. Doctors believe that a young woman should not make choices that could impact the rest of her life, even if that choice involves having a baby. Instead, doctors suggest other forms of temporary contraception, like the pill, which would allow them to have children later in life. Nonetheless, many women do want permanent surgery and find that no doctors are willing to perform the surgery regardless of their patient’s wishes. Hence, many patients angrily criticize the medical establishment for robbing them of certain choices.

While permanent contraception for women remains a serious issue, hysterectomies are never performed simply for contraceptive purposes. There are at least two other procedures (known colloquially as getting your tubes tied) that can also be just as effective with far fewer risks. Hence, a doctor who was pushing patients to have hysterectomies performed on them is simply gouging their insurance policy for as much as they possibly can. That constitutes medical malpractice, medical battery, insurance fraud, health care fraud, and more. Hence why Perwaiz will likely be spending the rest of his life behind bars.

The statute of limitations

Typically, cases like this are governed by the statute of limitations which places a limit on how long after an injury you can file a lawsuit. In this case, many of the patients didn’t recognize that their doctor’s conduct was illegal, and they had difficulty finding lawyers willing to take their case.

An argument could have been made that the statute of limitations should have only begun ticking down once the patient became aware of the medical malpractice. However, any attorney taking the case would have had to jump that hurdle prior to litigation.

If you’ve sustained a serious injury due to medical negligence, the Charlottesville medical malpractice attorneys at MichieHamlett can file a lawsuit on your behalf and recover damages related to your medical expenses, lost wages, and pain and suffering. Call today to learn more!