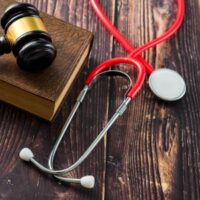 A plaintiff was severely injured after suffering a stroke during a cardiac catheterization procedure. The names of those involved in the lawsuit will not be reproduced here because the agreement included a confidentiality clause.

The plaintiff was injured after his doctor attached an air-filled syringe to the wrong catheter. The catheter led to the patient’s artery. The air bubble in the syringe went to his brain where it caused a blockage of blood (a stroke). As a result, the plaintiff required immediate endotracheal intubation and ventilation.

In this case, the insurers representing the defendants did not contest liability but instead focused on the extent of the plaintiff’s injuries to begin chipping away at any possible award of damages. A plaintiff in a similar situation needs to show that they have sustained injuries as a result of the defendant’s conduct. Medical malpractice is not different. In a case where negligence can be established without the intervention of a jury, defense counsel focuses on limiting damages to reduce their client’s potential liability.

MichieHamlett was able to successfully negotiate a $1.2 million settlement for our client, the plaintiff, who suffered a stroke during a cardiac catheterization procedure. Strokes often leave patients with brain damage. The key to limiting the extent of the brain damage caused by a stroke is intervening as early as possible before the lack of blood flow to the brain can cause severe and permanent death to parts of the brain.

Victims of strokes often have years of physical therapy, language therapy, and occupational therapy to manage. Their brains must often relearn how to do basic things like walking and talking. Since early intervention is the key to limiting brain damage, each moment is a race against the clock to get the patient the medical services they need. In this case, the stroke was caused when the doctor inserted an air-filled syringe into the wrong catheter. This caused a stroke. The patient languished while he was attempting to find a hospital that could provide the services he needed. One was much closer than the hospital that the doctor sent him to, but that hospital was outside the medical provider’s network.

In this case, had the patient been sent to an out-of-network (albeit nearby) hospital, the patient’s post-stroke prognosis may have been much better.

Have you been injured by a medical doctor? You may be able to file a lawsuit to recover damages for your past and future medical expenses, lost wages, and reduced quality of life. Call the Roanoke medical malpractice attorneys at MichieHamlett today to learn more!

By MichieHamlett Attorneys At Law | Posted on June 10, 2021
« MichieHamlett Secures $400,000 For 70-Year-Old Patient Who Fell From Hospital Bed
Do I Need Uninsured Motorist Coverage In Virginia? »