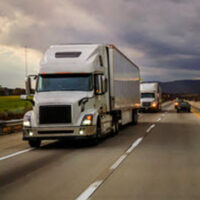 The plaintiff, a 50-year-old married father with a Ph.D. who worked as a higher education administrator, was on his way to work when he heard noises coming from his vehicle. He pulled along the shoulder to inspect the problem. The plaintiff ensured that he was on the other side of the white line and the rumble strip. The plaintiff had his flashers on when a semi-truck crossed the white line and the rumble strip, striking the plaintiff’s vehicle while he was inspecting it. As a result of the accident, the patient suffered a traumatic brain injury. The crash was captured on dashcam video.

The defense admitted that their own driver was negligent but argued that the plaintiff was also negligent for parking his vehicle by the side of the road for a “non-emergency”. This type of argument is generally applied when the defendant has no real defense to the charges. The truck left the road and struck a vehicle. Since the truck broke the law by failing to maintain their lane, the defense could not successfully argue that the defendant was not negligent.

Contributory negligence is an especially potent defense in Virginia because, unlike most states, we do not compare the plaintiff’s fault against the defendant’s.  In Virginia, a plaintiff who files an action against a defendant must be completely free from fault.  If the defense convinces the jury that the plaintiff was even 5% at fault, the plaintiff cannot recover anything, regardless of the severity of her injuries.

Virginia’s rules are the harshest toward plaintiffs. If the defense argument had been successful in this case, the plaintiff would have been barred from seeking recovery for his injuries even though the truck driver was clearly responsible for causing the accident. The defense attempted to argue that the plaintiff was negligent for parking his vehicle off the shoulder for a non-emergency. However, if the plaintiff’s vehicle had a problem and the plaintiff neglected to address that issue, the plaintiff could be held liable for any injury his defective vehicle caused to a passenger or other drivers on the road.  Thus, it was reasonable for the plaintiff to have pulled off the road to inspect his vehicle.

Have you been injured due to the negligent driving of a commercial vehicle? If so, call the Roanoke truck accident attorneys at MichieHamlett today to schedule a free consultation and learn more about how we can recover damages for lost wages, medical expenses, and reduced quality of life.