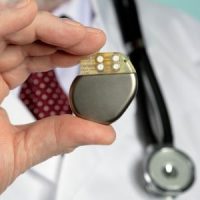 A man died of septic shock after a pacemaker installed by the VA hospital began protruding from his chest. His daughters filed a medical malpractice lawsuit against the VA. While the VA denied liability, they settled the suit for $550,000. While that may not seem like a lot, wrongful death lawsuits involving retirees without dependents and newborn babies tend to settle for lower than wrongful death lawsuits involving adults with dependents. That’s because individuals are compensated for past and future lost wages. Retirees don’t lose wages and neither do newborns. So, the recovery of the family is limited to medical expenses and emotional damages.

According to the lawsuit, the decedent had a pacemaker installed by the VA. He began to develop an infection around the area of the pacemaker and told doctors that it felt like it was migrating toward the surface of his skin. The patient received treatment for the infection, but over the course of the next several months, the pacemaker began protruding from the decedent’s chest and out through the surgical incision. Shortly after, a procedure was performed to irrigate and debride the surgical site. Three months later, the patient was back in the hospital. The pacemaker had to be removed, but by then, septic shock had set in. It was too late and the patient died.

According to the lawsuit, the doctors should have been more aggressive in how they treated the infection and removed the pacemaker earlier.

Another reason why this lawsuit likely settled out of court for half-a-million dollars is that the allegations against the doctor are not particularly strong. Both allegations involve judgment calls on what the doctor should have done as opposed to what he did do. In a case like this, one would expect doctors to focus on the infection at the surgical site. A jury would be asked to determine whether or not the doctor went far enough in the treatment of the infection. Ultimately, that is a judgment call based on a number of factors. The mere fact that the patient died is not enough to prove medical malpractice. If the doctor treated the infection in accord with the prevailing standard of care, then there is no medical malpractice, only an unfortunate tragedy.

Likewise, when to remove the pacemaker is another judgment call. There may be no prevailing standard on the correct time to remove a pacemaker under specific conditions. However, the patient’s condition was allowed to worsen until he became septic. If more could have been done to prevent that, then the plaintiffs would have a fairly strong argument.

Either way, rolling the dice before a jury is dangerous, and this lawsuit involved judgment calls. It could have gone either way.

If you have been injured due to the negligence of a medical doctor, the Charlottesville medical malpractice attorneys at MichieHamlett can file suit on your behalf and recover damages related to your continued suffering. Call today to schedule a free consultation and learn more about how we can help.